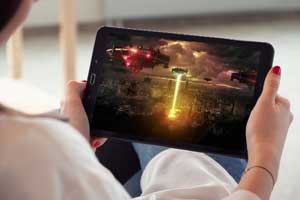 How to Play Wmv on Android Tablet – Best Apps

Luckily, PlayStore has several applications that allow you to play WMV files on android devices. Today, I will be sharing a list of the best WMV players for android devices.

What is a WMV file?

A Windows Media Video (WMV) is a video stored in the Microsoft Advanced System. The video can be anything from animation, movie, or video clip.

Most of these applications are lightweight and free. You do not have to worry about storage and subscription fees.

The VLC  Player is a must-have on any device. Released initially for PCs more than a decade ago, it gradually made its way to other platforms over the years – including Android. VLC player for Android supports the most popular file formats and comes with great customization tools, as well as a few other exciting features like video streaming. This open-source application is free and does not contain ads.

The advantage of using VLC for Android is the app supports several formats like MPV, MKV, AVI, MOV, and MP3.

How to Use VLC for Android

You can download the app from Google PlayStore. Launch the app and allow it to access your tablet’s storage. The app will scan your storage for media files. You can play your files from the applications directory or your tablet’s directory. If you play from your tablet’s folder, select VLC player when prompted.

There are several great WMV players for Android devices, but Archos stands out from the crowd. It has a modern interface that makes it easy to find information about the content you are watching, and it can handle just about any format you throw at it. In addition, it offers excellent support for subtitles and external USB storage. You can download the free version or pay a fee for the premium version.

BSPlayer is a well-established WMV player for Android that has been around for as long as anyone can remember. It’s an excellent app and supports all the formats you can think of, including WMV, of course. Its standout feature is its built-in subtitle finder that searches for subtitles online whenever you play a video. Another great feature is network streaming, which lets you watch videos online. Gesture support is also handy, and you can keep the app running in the background while you do other things. The app is available for free but will contain ads. To remove the ads, you will have to pay a small fee.

KMPlayer is an excellent option for Android users who want a full-featured multimedia player. The app offers features like HD streaming, support for multiple audio tracks and subtitles, and the ability to run in the background. KMPlayer also supports over 30 different languages, making it a good choice no matter where you are in the world. The best part is the application can handle UHD 4K videos.

MX Player has been a mainstay on Android devices for many years because of its reliability and performance. Compared to the other apps we’ve mentioned, this WMV player doesn’t offer a lot of bells and whistles. It was designed mainly to play videos quickly and efficiently, regardless of format. MX Player is considered the best performer by many.

GPlayer is a WMV player for Android that’s worth using despite the lack of popularity compared to other media players on our list. It offers several exciting features that will make your life easier if you’re the type of person that watches a lot of videos on mobile. This player supports multiple windows and streaming directly from YouTube and some popular platforms.

This is a free-to-use app for android phones and tablets. It can play several media formats like WMV, DivX, XviD, FLV, M4V, MOV, 3GP, and AVI. Download the app from PlayStore a allow permissions. It will scan your storage for any media file. It’s a decent app that does not use up a lot of space.

If those apps don’t work for you, try using a video converter. There are several software programs available, and in this article, we will use the WonderFox HD Video Converter.

This software is a free download and is compatible with windows. Let me take you through the step to convert your WMV files for android tablets.

If you do not have a computer, you can download a converter from PlayStore on your tablet. You can also use online video converters. Be cautious not to download malicious files from the internet in the process.

Most Android devices do not support the WMV format. This does not necessarily mean you cannot play WMV files on your android device. The easiest way is downloading a media play that can support WMV files. A standard option is the VLC media player for Android. It can pretty much support most media formats. Alternatively, you can choose an app from our list. An issue with some of these apps is annoying ads. You can pay a small fee to block the ads for an uninterrupted video experience.

If you have a PC, you can install a converter, especially if you are dealing with large files. The process will be much quicker than using an android converter. All you need to do is transfer your files to your PC, use a converter of your choice, run the program and transfer them back to your tablet. Online converters are convenient, but there is a catch. You could end up downloading unwanted files to your tablet and ultimately damage your device.

Was this article helpful? If you have a question or an idea to add to our list, leave a comment.